This year our costume group wanted to do a theme night with dancing. As a guideline, Shakespeares „A Midsummer Night’s Dream“ was named. This included greek historical and mythological clothing as well, so I wanted to do an Athena cosplay. She is the godess of female crafting and tactical warfare. As a result, my costume includes both female and warrior aspects. You can see the finished dress here. 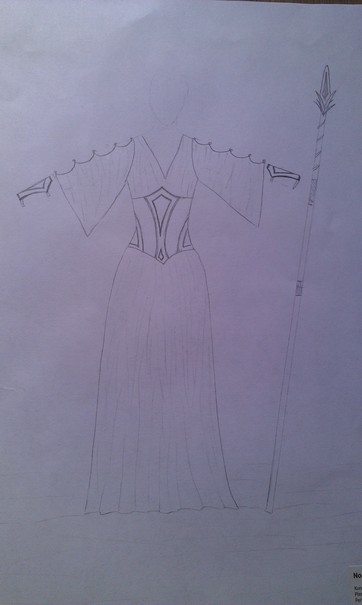 Fortunately, I already had a dress suitable for the project. Some years ago, my grandma sewed a dress form e based on the costumes of „Troy“. However, I did only wear it once when portraying Irina from Asterix. 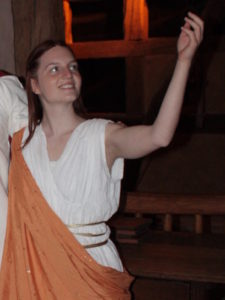 First of all, I added simple sleeves. The front and back parts are only joined on some points were I sewed some beads to the fabric.

In addition, I could gain some length by altering the seam. The sleeves look like this now:

The armor pieces turned out to be the more complicated part of the costume. First, I had to create a pattern. I did this by simply covering my dress form in plastic and adhesive tape, drawing the lines and cutting them afterwards. 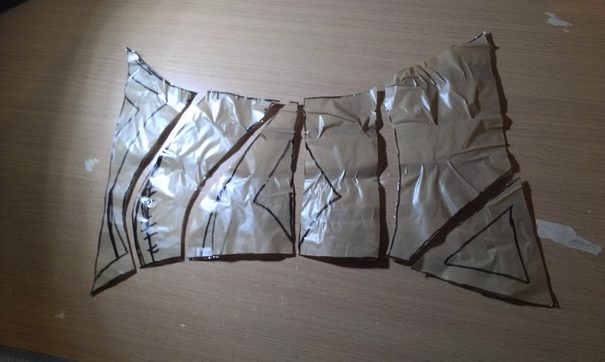 Second, I transfered them onto paper and worked out the details. The bracelet and spear were drafted by hand. 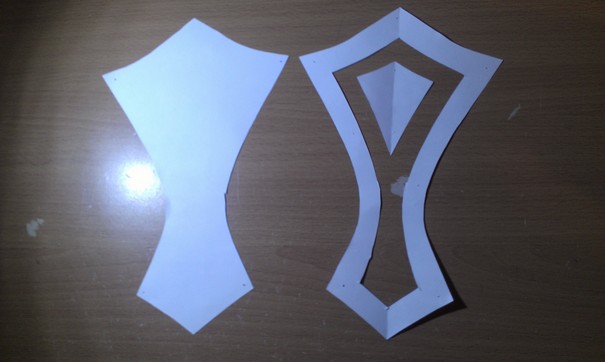 Some time ago, I watched some tutorials on how to craft foam armor by Kamui Cosplay, Evil Ted Smith and Andrew DFT on Youtube. So I wanted to try it out. Because the professional plates are very expensive, I buyed some sports mat made of polyethylen. With I knive, the patterns were cut out. In the next step, they had to be glued to each other. 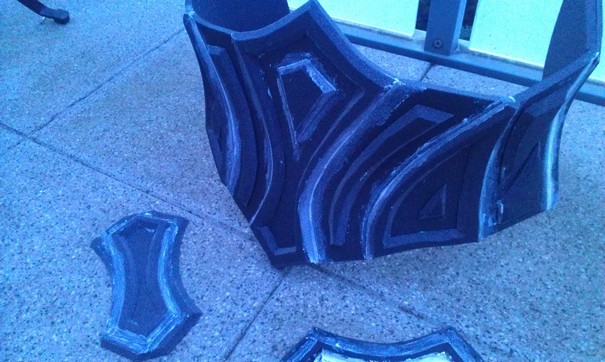 This turned out to be more difficult than expected, because I could not find the right type of glue. I tried out several, as shown below. The „Montagekleber“ worked best. Furthermore, I used some material to fill out the small gaps.

In the next step, I had to add a base coat to the polyethylene. Since Plasti-Dip was not available, I buyed Kandy-Dip, which seems to be the same basically. I applied four layers of black. 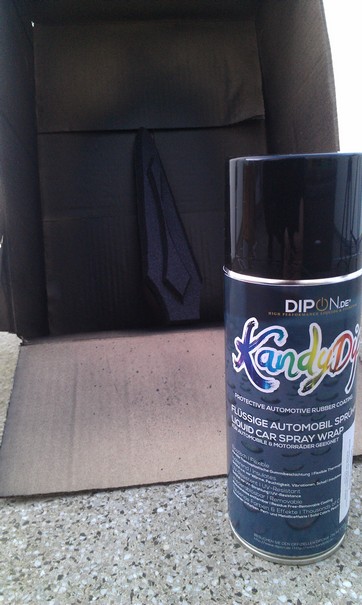 Afterwards, the color was applied. Due to the porous material, it was difficult to achieve a nice surface. On the photo, you can see the bracelet with one layer of color. 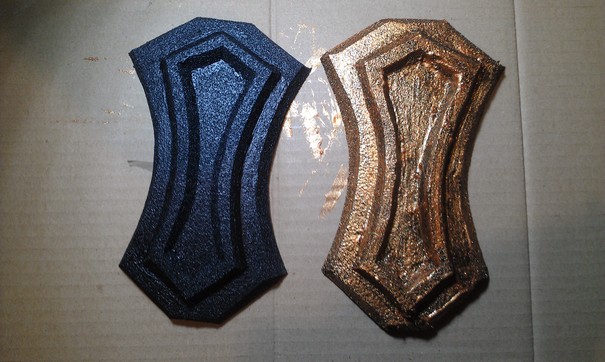 After applying six layers of color, I took a photo: 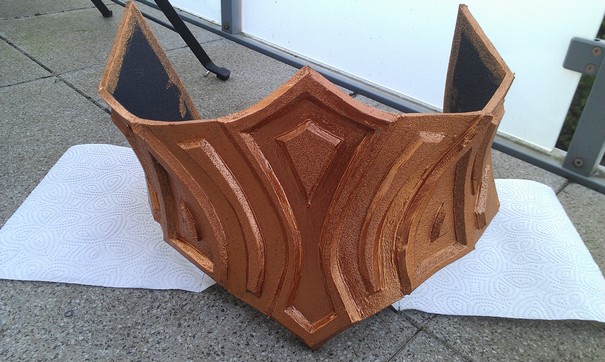 Then I had to make it look older and more like metal. Therefore, I used brown and bronze Acrylic color.

For the closure, I did sew a complete lining of cotton fabric and attached eyelets. 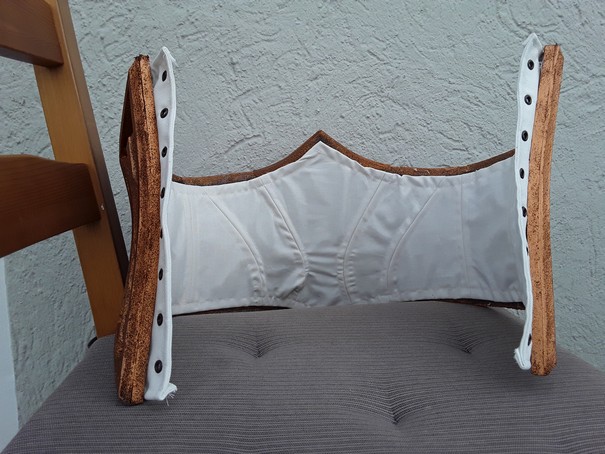 In order to create an appropriate headdress, I buyed some copper wire and embossing film. By the way, I did not use the massive bracelets in the end. 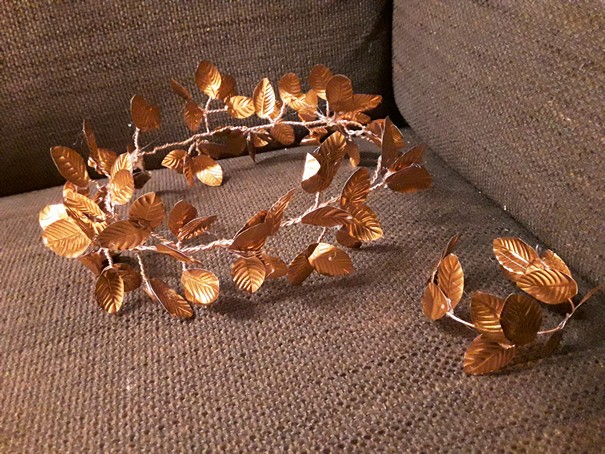 In addition, I wanted to build a spear. Is is made of two pieces of 22mm wood. They are connected with a short piece of metal and can be separated for transport. I had some help with this construction. 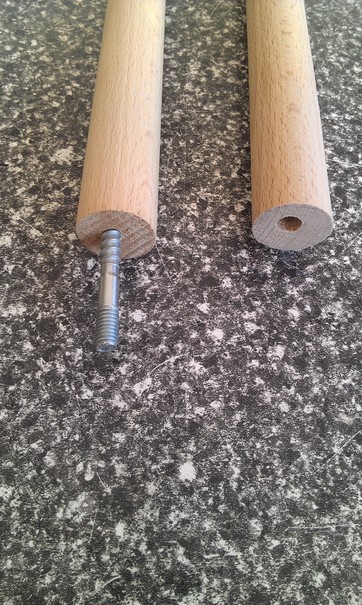 The pike is made of foam like the other armor parts. I used some duct tape… 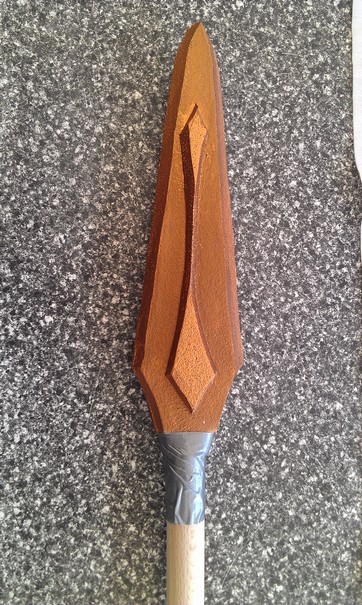 …that I could hide with leather straps. 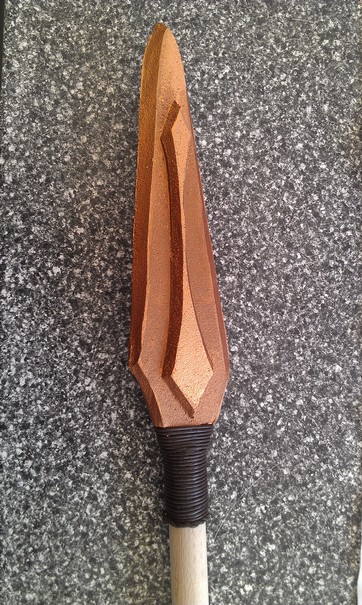 You can see the finished dress here.