You can see the finished costume here.

The shirt is made out of one metre of linen and uses a lace very similar to the promo pics. Due to the fact that my sewing machine did not work well at that time, I had to do the whole shirt by hand. Therfore, I can use it as a basic layer for historical dress as well. I already had trousers and boots and some good fabric in my stash, so I hoped to make an inexpensive cosplay. Although I had to buy some things, I ended up very well, I think. All the patterns were designed by myself in order to save money.

In the next step, I had to do the inner waistcoat, which can only be seen in front and the collar. I had to paint the stripes, the golden trimming and the Templar cross. I used some leftover fabric of my Anglaise and created the buttons myself as well.

The outer waistcoat was the “trouble part” of the costume, since it was very difficult to find a blue that would consort with the color of the other waistcoat. I even had to dye the middle part – which I will never do again.

But I really liked to paint the inner part of it with white fabric color and a stamp. All in all, it took two hours, but in my opinion it was worth the work. I could achieve a kind of used look and since the pattern of the original cannot be seen in detail, I had the possibility to choose a pattern I like. 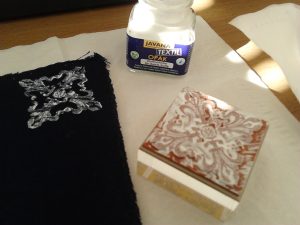 To complete the outfit, I had to do a pair of gauntlets in two colors. They close with five buttons each. In addition, there is a sort of cape round the shoulders. I painted the buttons with acrylic paint.

I made the gauntlets of the same materials. They close with five buttons each.