Pirates of the Caribbean: Plum Pirate Gown Version 1 vs. Version 2

You can get to the finished outfit by clicking here.

I already wanted to have Elizabeth Swann’s Plum Pirate Gown when I first saw the movie. At this time, I did not really like rococo gowns, but since the movie does not really care about historically accurate costumes, the style was some kind of mixture between 17th and 18th century court dresses and the ones you would wear as a pirate queen. However, I used my basic rococo pattern and altered it to fit the shape of the dress. You can see the finished project below: 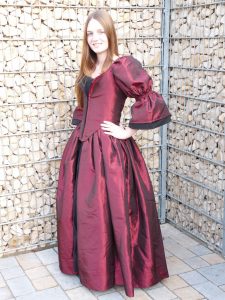 On the same time I watched the series “The Tudors”, which is set in 16th century England and tells the story of Henry VIII and his six wives. So I decided to make a double project: While sewing only one skirt I wanted to do a Tudor bodice and the said pirate outfit. As a result, I did not need to buy a lot of fabric and could easily put it into my small wardrobe. However, the color must be the same and since it was said in the movie that purple is only for members of the royal family (I still do not know whether this is true), I did not want to use it. When looking the movie, you can see that Elizabeths dress is in fact purple. Only in candlelight it appears red. This was my first mistake. 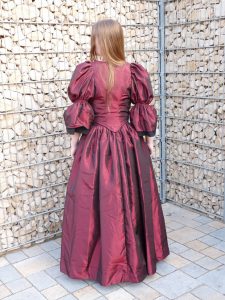 The second thing I changed was the pattern of the sleeves. To this time, I was still a beginner in sewing and wanted to use a shape that could be easily done. In addition, I did not like the strange appearance the movie costume had due to the huge sleeves. I have to admit that I do not know the reason anymore for not using the golden details on the dress. I either could not find something fitting the design or just did not like them 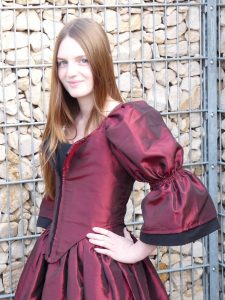 By the way, I used an online patterns generator for the Tudor dress basic bodice and the corset which goes underneath. The upper sleeves are the ones used in my Mists of avalon dress, while I created the black and white sleeves myself. In addition, I created a French Hood, which can also be seen on the (German) pattern page here. 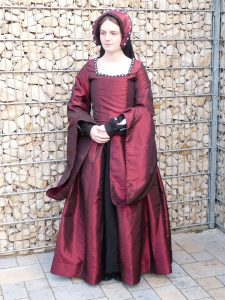 To this day, I did not wear one of the outfits yet.

Version 2 – I will do every small detail this time

About six years later I buyed some taffetta for my black rococo dress and realized the purple would be a nice choice for a second Pirate Gown. Therefore, I added three yards to the amount I needed for the other one. However, some time passed until I started it. One day, I simply wanted to do the project and draw the pattern on one evening, starting sewing only a few days later. To this time, I already had a “Rum Island Shift”. This is the white dress Elizabeth wears underneath the plum outfit. You can see it when she has to swim to the island and leaves the dress on Barbossa’s ship. In the meantime, I managed to take some photo, so that the Rum Island Shift did get its own page. 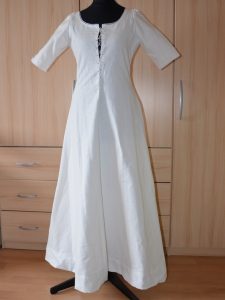 My version is made of heavy off-white cottong fabric. In contrast to the movie dress, it does not have a pattern. On the next photo, you can see the lacing on the sleeve.

I also added some lace on the neckline. The dress is closed with a front lacing through hand-stitched holes. 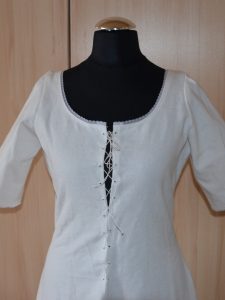 The dress itself was far more complicated than most of the other costumes in the movie. You cannot see it on the first sight, but it has two layers on the front bodice while having only one basic layer on the back. One of the front layers is made of black fabric with a kind of lace structure. You can only see it in the middle where the upper layer opens. The second layer is made of the main dress taffetta, while its lining has a pattern. However, both bodice layers close at the same point. Since Elizabeth seems to open only one closure and afterwards gives only one dress to Barbossa, I do not think the black bodice and the black skirt are a separate dress. 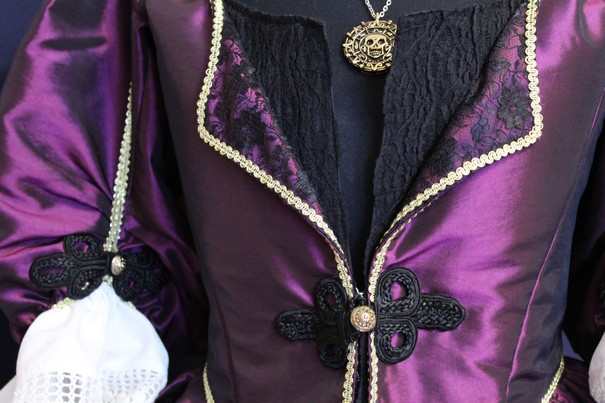 Therfore, the bodices have only one back piece. In addition, she does not wear any form of corset, so that i had to add boning to the main dress:

In order to make the bodice as thin as possible, I did only use three layers. The boning is inserted between the lining and the middle cotton layer, while this middle layer is also treated with the outer taffetta as one on the sewing lines. Therfore, I had to do every sewing step in the right time. Finally, the bodice divides up into two parts on the middle front. In order to make the black bodice stand upright, I added some boning, while the purple one does not involve any, so that it can be turned down at the centre front edge. Since lace fabric is very expensive, I used a 55yards package of black lace and sew it to a cotton basic structure. 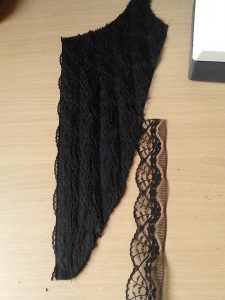 At the same time, I added the closure to the inner layer. 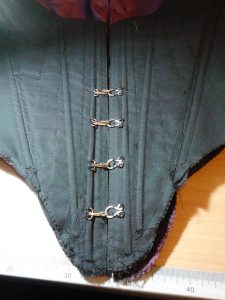 On the finished dress: 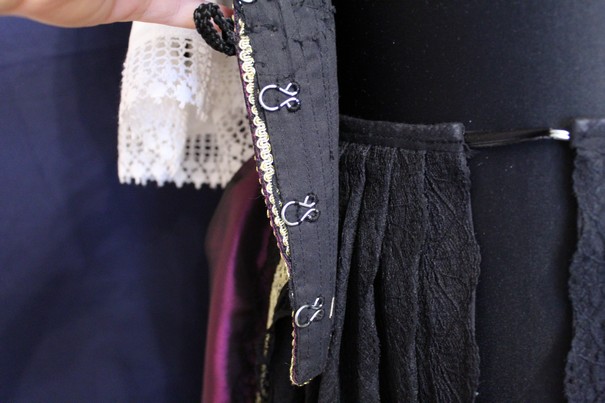 Instead of painting a flower pattern on the lining of the outer layer, I added some lace. I did not even try to find a purple fabric with flowers on it, because it would be impossible to find a color that fits the one of the main dress. 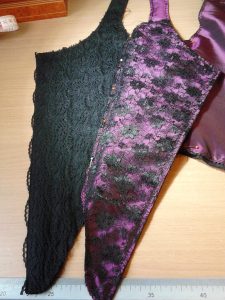 On the bottom, both bodices are sewn together so that the skirt is inserted between them. This was not easy at all, because the width of the skirt did not match the one of the bodice and I hade to change the folds several time.

As a result, the inner part of the bodice looks good as well. 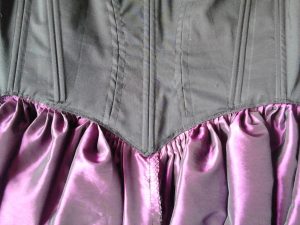 In the next step I had to do the front of the skirt. A golden trim is placed on double-sided black lace. I did use two parts of the black lace already mentioned above. It was more difficult to find the golden trim. 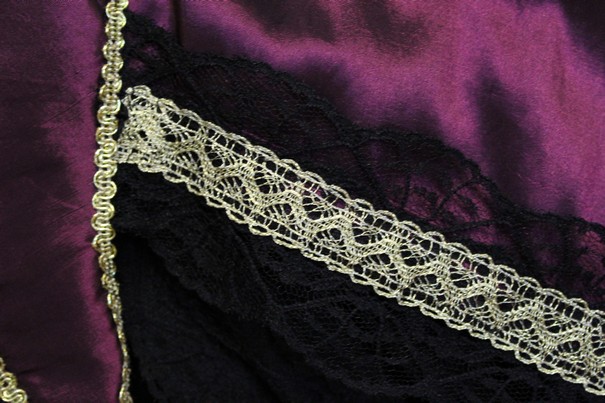 Now I had to sew the black skirt, that is only shown in the front. It is not closed but reveals the Rum Island Shift. Like the black bodice, it is originally made of black lace fabric. I recreated it the same way I did before, by sewing the lace on a cotton basis. In order to save money and storage space, I did use the skirt from the Military Rococo Dress. Since the lace is only added to the front, I can still use it the other way round for the Military dress as an alternative to the linen skirts I have to go with my other rococo outfits. By the way, I originally made this skirt for the first version of the dress. 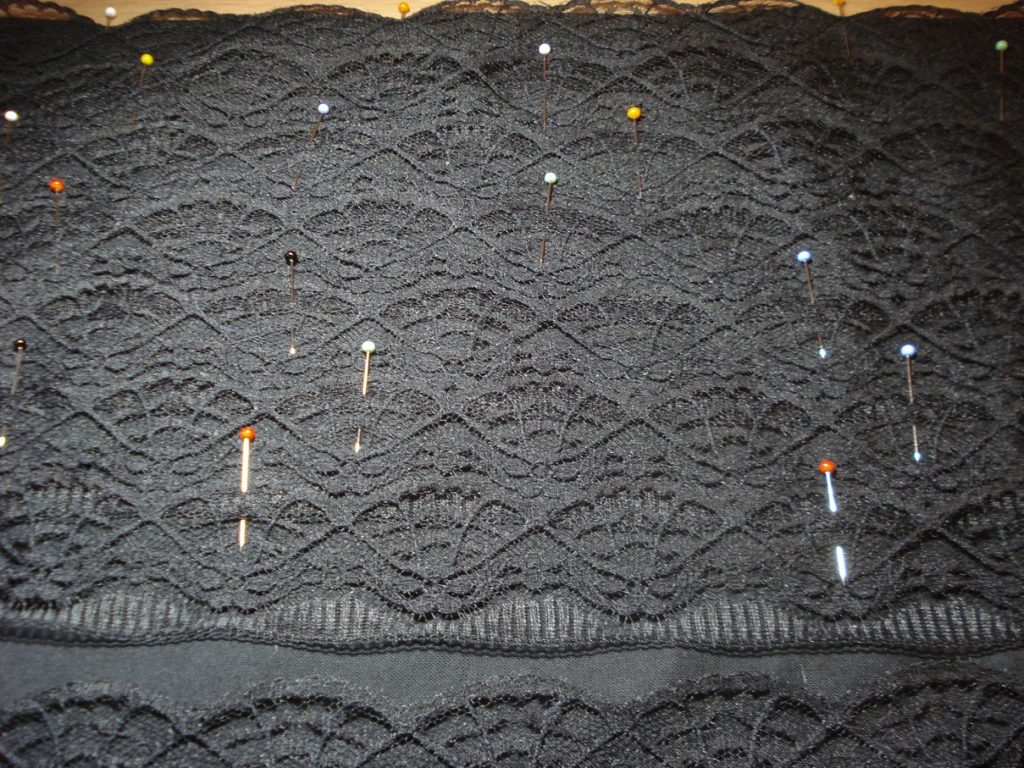 Finally, I had to do the sleeves. They are very wide and mid-length. On the bottom, they show a white lace decoration. This is sewn to the main dress, not to the Rum Island Shift. I recreated it by using some old lace and some cotton fabric.

In the next step the golden trimming had to be added to the bodice. I used a total length of some yards. In addition, the bodice has a decorative set of black closures and golden buttons. 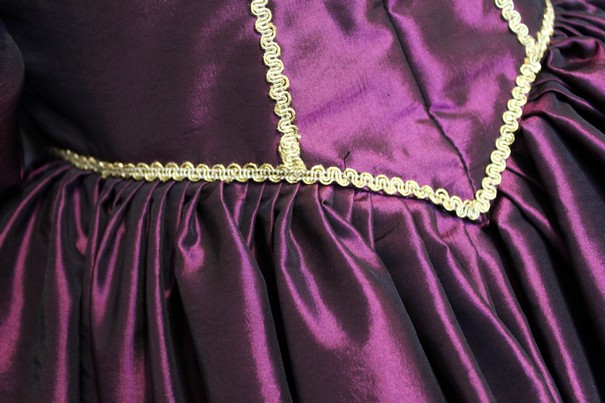 To complete the outfit, I had to turn the skirt into a “polonaise-style”.

Some time ago I buyed a pirate necklace. It is not an original movie replica, but looks pretty good. You can get to the finished outfit by clicking here. 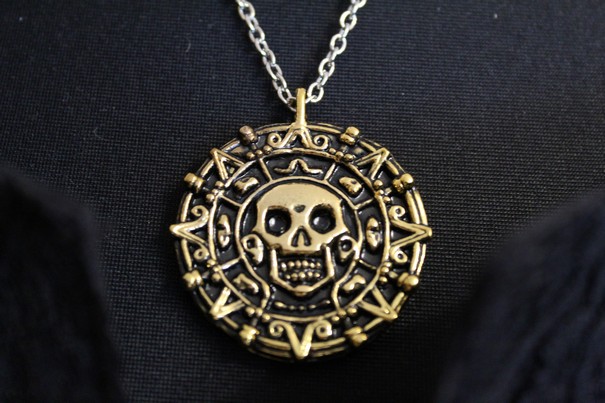