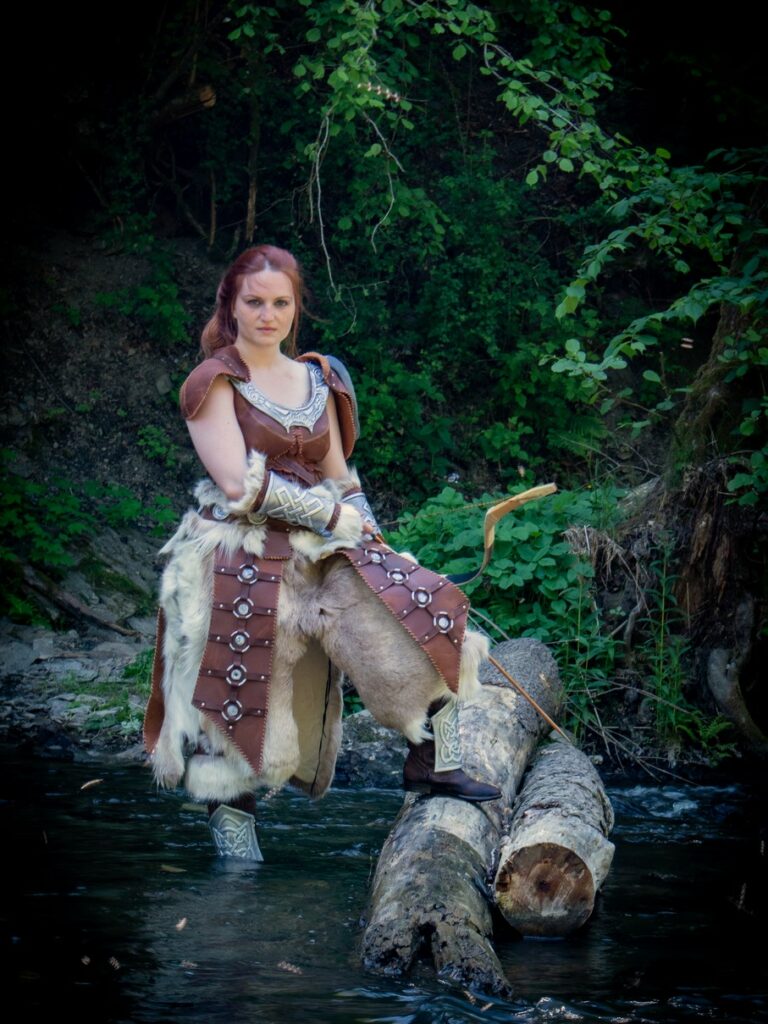 The Elder Scrolls V: Skyrim is one of my long-time favourites in Gaming. I love both the setting and the graphics, which are, combined with some mods, very acceptable even ten years after release. I really fell in love with a particular set of armor, that I wanted to recreate as a cosplay. It is called the Scale Armor, a very beautiful combination of leather, fur and metal elements.

Although I wrote a detailed making-of story on a separate page, I want to mention some steps anyway: The set contains several pieces: A main torso with added front and back panels protecting the legs, gauntlets, a belt, and shoes with an additional plate on each shin. All patterns were made by me and all oft he construction process was made by me as well (I had some help with the sword).

The torso is constructed on top of a corset-like top made of fabric with plastic boning. In the next step, the leather was cut into little scales and glued to the base. It is laced on both sides through eyelets and connected with hooks at the shoulders. As said before, the leg parts are not a seperate piece, but linked to the torso by rivets. The connection is hidden by a belt. In addition, some seams were hand-stitched with linen thread.

While the bracers can simply be slipped over my hands, the shoes are more complicated. They contain three pieces each: the basic leather shoe (a simple pair of leather that I purchased several years ago), the metal-looking plate (that is closed with two hooks each), and a band of furry material that is placed on top. By using this technique, I can use the shoes for several cosplays and save a lot of money and space in my wardrobe.

The metal parts are made of a combination of foam layers afterwards covered with Worbla. In the next step, they were colored with Vallejo products. Since I do only use second-hand fur for my cosplays, the reindeer looses a lot of hair, but it still keeps me warmer than anyone would like on a summer day. For a further used-look, I tried out some weathering techniques. However, I still need to improve on this.

I would like to draw your attention to the bronze sword. While the silver one is a real metal sword that I normally use for Viking Age reenactment, the other one is built especially for the Skyrim cosplay. It is meant to be Dawnbreaker, an artefact that you can find on a quest for Meridia. I had some help by two friends with the construction of the LED technique, that is hidden in the upper part of the sword. As a consequence, the handle and the case for the lightning elements were 3-d modeled by the two of them. Afterwards, I added 5mm foam and foam clay on top. The blade has a wooden centre for more stability.

Thanks a lot to Rainer and Noa for the LED technique, Daniel for taking the photos and Nils for his assistance at the day of the shoot.

We also did a short video showing the costume (Link to YouTube).