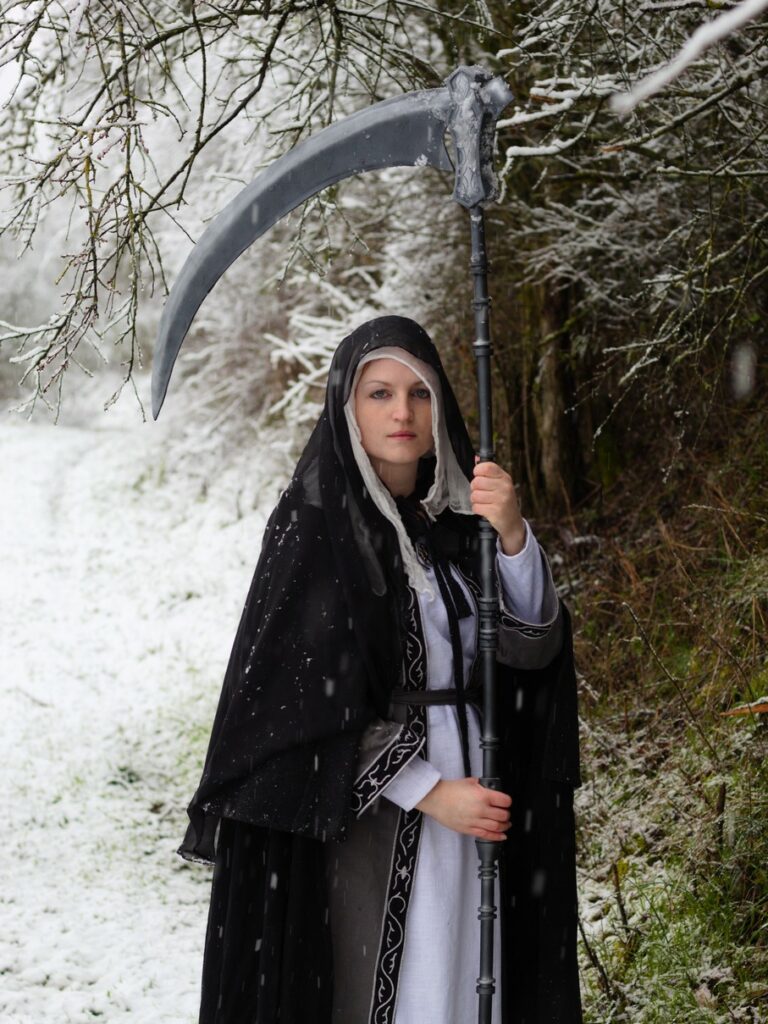 Since conventions are mainly during the summer and good air condition systems are not very common in Germany, I thought about sewing a simple outfit for the ultimate heat. In addition, I can dress up very quickly. Therefore, I decided to cosplay Sister Friede, a boss from the game Dark Souls III. She is dressed in an outfit that reminds me of a medieval nun or a priestess of some sort, but also carries the symbol of the death himself, a giant skythe. Except for the bare foots, I tried to recreate her look in detail, but a shooting in snow was simply to cold. If you are interested in more Dark Souls cosplays, make sure to visit my Pyromancer cosplay page.

As with all of my newer costumes, I created a separate making-of page, so I only sum up the general layers. While the front of the dress hast wo visible layers made of linen, I joined both of them to create a single one in the back. Therefore, the closure is hidden on one side of the dress. The sleeves are multi-layered as well. I wear a half-circled cape.

While I could create the trimming myself by using my sewing machine (it is the buttonhole-stitch in a way that is not intended), the application on the front panel is simply sewn onto the fabric. For a more tailored look, I wear a belt. The element that makes the outfit remind me of a priestess is for sure the veil oft wo contrasting fabrics, but the giant skythe makes up a more dramatic element and surpasses the innocent look. It can be divided into three parts in order to make transport more simple.

Unfortunately, I did not have a chance to wear it yet. The photos were already made during the last days of winter (thanks to Nils), but I hesitated to upload them during the more critical months of the Corona crisis.

Have a look at the making-of page as well and my other Dark Souls character, a Pyromancer.